The second round of the 2019 Club Championships took place on Saturday, and once again, the weather was not on the golfer’s side.  Steady rain and wind made the going tough throughout the day.

There are some clear leaders after round two; however there is still a lot to be decided with 18 holes still to play.  The leader board feature, which can be accessed below in each grade, on the club website allows you to look at individual hole scores for each player – simply click on the leader board link, then on the players name and you can see how they went throughout the day.

In the Men’s A grade draw, things are tight at the top.  Round one leader Felix McKillop had a 76, to go with his first round score of 75, which is good enough for a 1-stroke lead over former champion Leigh Yanner.  Our leaders producing scores of 76 and 74 respectively, in the conditions that they had to contend with is something to congratulate them on.  Interestingly, both closed with a birdie on the 18th to whet the appetite for next week!
Further back the battle for the podium is well and truly alive, with the just three shots separating 3rd and 6th position.  In that mix is Drew Fletcher in third place, as well as former champions Alec Morley and Paul West who know what it takes to get the job done!  It is looking like A grade is will go down to the wire.

CLICK HERE  for the round one leader board for A Grade.

Our runaway leader in B grade after round one, Craig Launder still has the outright lead, although there are a few breathing down his neck.  Craig holds a one stroke lead from Chris Hosking, who had a solid round which enabled him to claw back 6 shots on our leader. The top 4 places are all within three shots of the lead, and rest of the top ten in B grade are all in the mix, in what promises to be a close final round next week

CLICK HERE for the round one leader board for B Grade.

Our C grade Championship to date has been a race of 3.  Our leaders from round one have put a gap on the field, with our round 1 leader John Drake having another solid day scoring 35 points, extending his lead to 3 shots from Tim Dyer with Dean Burrows a further shot back.  Although a nice position for our top 3, there are still plenty of chances further back, with positions 4 through 15 all within 6 shots of each other and a strong final round could see one of these contenders come from the pack.

CLICK HERE for the round one leader board for C Grade

Two former champions still lead the way in the Women’s A grade event, although they have swapped spots. Sue Cutten now leads the way, 5 shots clear after a second round 87 which saw an 11 shot swing from second place Kate Fletcher.  Sandra Miller has a hand on the podium a further four shots back, but it will be a tight tussle with Mary Hosking in 4th place one shot further back.  All four are still in with a chance for overall honors, and with the top three playing together next week, Mary just might fancy her chances of sneaking up on our leaders unseen!!

CLICK HERE for the round one leader board for A Grade.

Robyn Matthews, our runaway leader after the first round has continued that form, and now holds a commanding lead over second place Anne Maree Dyer.  As we know, it isn’t over until the last hole, and the chasing pack will do their best to reel Robyn in.  The race for the minor placings will go down to the wire in any case, with just 9 shots separating places 2 through 6.

CLICK HERE for the round one leader board for B Grade.

In C grade, Sabine Bommer had a nice day out, turning a 3 shot deficit into a 5 shot lead after scoring 30 points.  Round one leader Jo Docker is in second place 5 shots adrift.  A close battle is in store for the third round.

CLICK HERE for the round one leader board for C Grade.

Our leaders have been seeded for the final round next week, and we are hoping the current weather forecast improves a little bit so we can see a final round played in more pleasant conditions than the first two – and a large spectator gallery following along.

The final round for our seeded players commence at 9.42am with the Women’s C grade, followed by our B grade and A grade contenders.  Our Men’s C grade will be commencing at 11.44am, followed by those in B grade then A grade.  CLICK HERE to view the draw on the club website.

Good luck to all of our contenders, and we will look forward to seeing who can add their names to the illustrious list of champions of the Flinders Golf Club 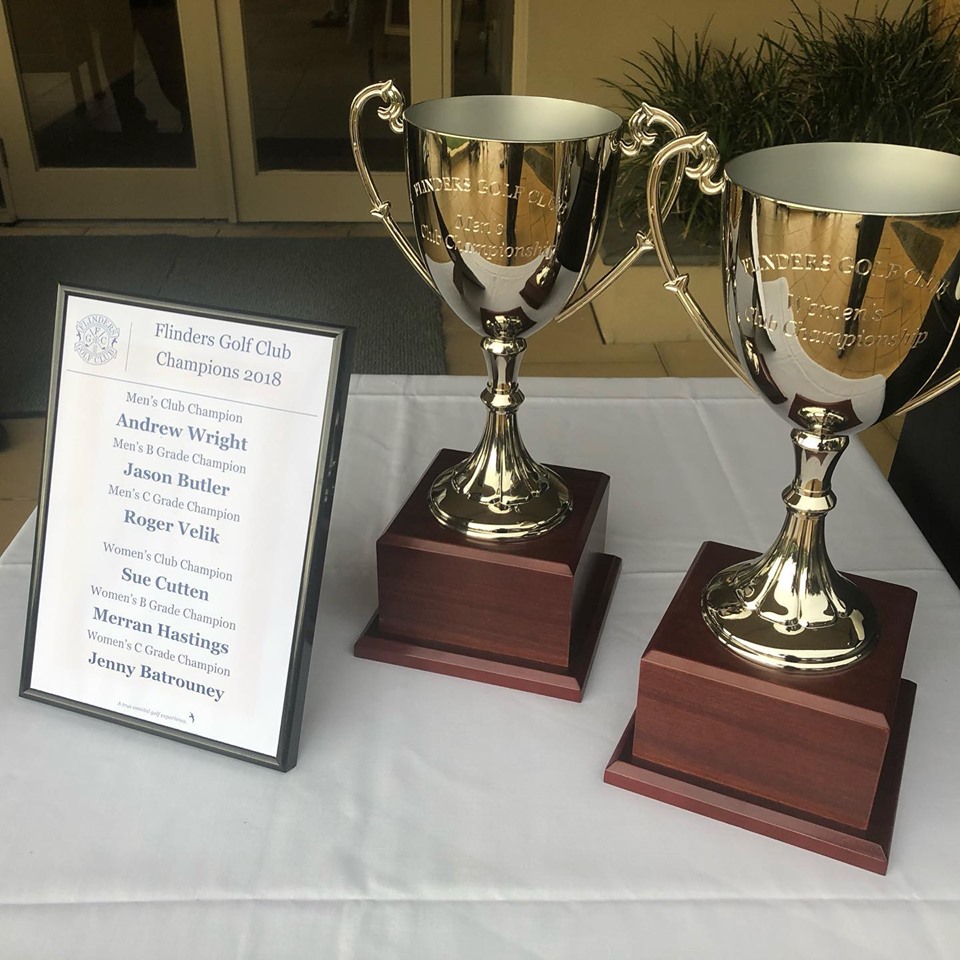