We all know what Ready Golf is, don’t we? It means playing our shots when we’re ready.

Ready Golf means THINKING AHEAD so that you’re READY TO PLAY when it is YOUR TURN. Ready Golf applies EVERYWHERE on the golf course — on the tees, on the fairways and on the greens.

Golfers are typically at their worst AFTER they have hit their tee shots. How often do you see players watch other players hit first, and start thinking about their shot only when it’s their turn? How often do you see drivers of carts wait for their partners to hit before driving to their own balls? How many times do you see four golfers walk to the player’s ball that is farthest from the hole and wait for that player to hit, then move down the fairway to the other balls as if they were a caravan? Ready Golf means that ALL golfers should go to their balls as soon as possible and get READY to play their shots. While waiting to hit, PLAYERS should SURVEY their shot, SELECT their clubs, TAKE them from their bags, and STAND at their balls READY to step up and make the shot when it is their turn.

That’s Ready Golf! Ready Golf particularly means that the DRIVERS of carts should DROP OFF their partners, let them CHOOSE their clubs (take extra ones if req

It is important that everyone try to help out to find a lost ball in order to keep play moving. But players should do it AFTER hitting their shots, not BEFORE. How often do you see three or four players searching for a lost ball, while NONE of them are getting ready to hit? Use common sense. The player who is closest to the pin and scheduled to hit last should be the first to help the player whose ball is lost, while the players who are farthest away from the pin should PLAY THEIR SHOTS FIRST. When the players farthest away have played their shots, they should resume looking for the lost ball, while the players who are closest should get ready to PLAY THEIR SHOTS. In this way, slow play is not compounded because of a lost ball. 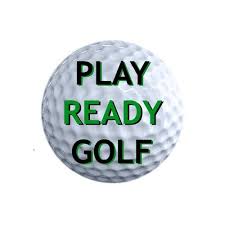 How many times do you see players leave their clubs in front of a Green? When the players finish, they then walk to the front to get their clubs. ALWAYS, and we mean ALWAYS, leave clubs at the back or side of the Green closest to the next tee. If a shot is played in front of the Green first, the player should move his or her clubs to the back or side of the Green before playing the next shot. NOTHING is MORE ANNOYING than watching players walk to the FRONT of a Green to retrieve their clubs AFTER everyone has putted out. AND don’t stand around chatting and writing down scores either. After the group has putted, go to the next tee, so the group behind can play their shots.

Speeding Play on The Greens

Emulating the pros around the putting green has done more to slow down golf than any other single event. How often do you see players waiting until it is their turn to play, and then walking around the putt as though they were putting to win a green jacket at the Master’s? Playing Ready Golf around the Greens means getting READY to putt BEFORE it is your turn! Players should line up their putts WHILE other players are putting, so they’re ready to putt when it’s their turn. Ready Golf also means putting CONTINUOUSLY if the ball is not in someone else’s line, and if the player does not have to spend a lot of time surveying the putt. If you miss a putt by one or two feet, for example, and have an open stance to make the next putt, you should MAKE the putt INSTEAD of MARKING the ball and waiting for another turn — unless it is a tricky putt and you want extra time to survey it. In that case, mark the ball and survey the putt while someone else putts. When it is your turn, walk up to the ball, take your stance and make your putt. While there are no time rules associated with putting, a rule of thumb is to get off your putt within 20 seconds from when it is your turn. This means you should be able to approach the ball, take your stance and make your putt within 20 seconds. Obviously, you can only do this if you SURVEY the putt WHILE other players are putting. When you putt, you should always take your time, so you make a smooth, unhurried stroke. Ready Golf DOES NOT mean RUSHING. If you prepare in advance to putt, you can take your time AND play Ready Golf.

Farthest from The Hole

There is no reason Ready Golfers can’t play in the order of who is farthest from the hole. In Ready Golf, the person farthest from the hole should be READY to play first. There are, however, a few common-sense exceptions. In a foursome in which one or two players are walking and one or two are using carts, the players with the carts should hit FIRST if they reach their ball first and are 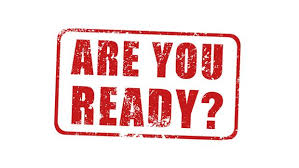 Ready to play. When someone hits a shot, but is still farthest from the hole, players should hit BEFORE that player if they are Ready. Here are two examples. If a player hits a tree or some obstruction with a second shot and is still farthest from the hole, the players closer to the hole should hit first to speed up play. If someone is off the Green in a sand trap and hits it furthest from the hole, the other players should not wait for that player to walk around the green to play the next shot. Play should continue until that player is READY to make the next shot. In fact, NOTHING is more DISCONCERTING than watching three players on the green WAITING while the fourth player cleans up the sand, walks to the ball, surveys the putt and then plays.

Ready Golf means BEING READY to play, not playing when you’re ready. Here are some simple rules.

The R&A’s advice on ready golf is as follows –

“Ready golf” is not appropriate in match play due to the strategy involved between opponents and the need to have a set method for determining which player plays first. However, in stroke play formats it is only the act of agreeing to play out of turn to give one of the players an advantage that is prohibited. On this basis, it is permissible for administrators to encourage “ready golf” in stroke play, and there is strong evidence to suggest that playing “ready golf” does improve the pace of play. For example, in a survey of Australian golf clubs conducted by Golf Australia, 94% of clubs that had promoted “ready golf” to their members enjoyed some degree of success in improving pace of play, with 25% stating that they had achieved ‘satisfying success’.

When “ready golf” is being encouraged, players have to act sensibly to ensure that playing out of turn does not endanger other players.

“Ready golf” should not be confused with being ready to play, which is covered in the Player Behaviour section of this Manual.

The term “ready golf” has been adopted by many as a catch-all phrase for a number of actions that separately and collectively can improve pace of play. There is no official definition of the term, but examples of “ready golf” in action are: