This weeks GREAT AUSSIE WIN is a special effort in more ways than one.

There have been 10 sub 60 rounds in US PGA history, and only twice has it been done in the final round by the winner of the event.  Stuart Appleby became one of the two in 2010, joining David Duval who achieved the feat back in 1999.

Read on for more on this great story, and some highlights of the final round.

Shooting a sub-60 round is one of golf’s toughest challenges for even the best players. Indeed, only a handful have done it in the professional game. For your average club golfer, forget about it. You’re doing exceptionally well to touch those numbers even with your best nett score.

The final round of the 2010 Greenbrier Classic, and Stuart Appleby was seven shots behind leader Jeff Overton.

He got it. Appleby carded nine birdies and an eagle for a round of 59 to win the tournament by a single stroke over Overton and record his first victory in four years on the PGA Tour.  Appleby went out in 28 and came back in 31, with three straight birdies from 16, including a two at the last, to finish 11-under-par for the day.  At the time, Appleby’s 59 was the fifth ever on the PGA Tour – and the second that year, with Paul Goydos’ shooting that magic number at the John Deere Classic.

The pair joined Al Geiberger (1977 Memphis Classic), Chip Beck (1991 Las Vegas Invitational) and David Duval (1999 Bob Hope Classic) in the history books.Since then, Jim Furyk has become the synonymous with low numbers – Not only did he card a 59 at the 2013 BMW Championship, he later went on to card the PGA Tour’s first ever 58, at the 2016 Travelers Championship.

In 2017, Justin Thomas and Adam Hadwin both shot 59s just a week apart to become the seventh and eighth players to go sub-60 on the PGA Tour.  Since then Brandt Snedeker in 2018 and Kevin Chappell in 2019 have joined the party. 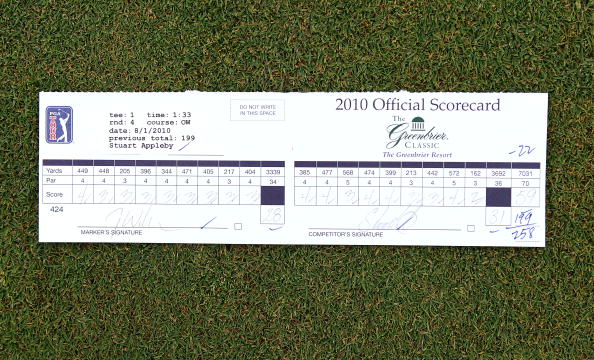 Stuart Appleby’s scorecard is seen on the 18th green after he finished with an 11-under par 59 during the final round of the Greenbrier Classic on The Old White Course at the Greenbrier Resort on August 1, 2010

The Folowing article takes us through the final round, from our friends at Golf Australia:

August 1, 2010 is a day that will live forever for Stuart Appleby, whose career has been dogged by a back injury in recent years, but already counts an all-time great of golf in Australia.

Appleby’s ninth victory on the United States PGA Tour – and his first for four long years — came with an epic final round at the Greenbrier Classic in West Virginia.

His 59 is a milestone for Australian professionals, the best-ever score on the big tours of the world. He became just the fifth man to break 60 in US Tour history when he rolled in a left-to-right slider from just outside three metres at the Old White course at the Greenbrier Resort.

It was his ninth birdie of the day to go with an eagle at the par-five 12th hole. At 11-under par on the par-70 layout, he won by a shot having started the day seven shots behind the leader, Jeff Overton.

“Effortless,’’ was how Appleby subsequently described his round some years later, at the same time wondering why the game was not always so easy. “I made a lot of putts. That’s an understatement!’’

Greenbrier was soft after recent rain, playing short, and accessible to the world’s best players. JB Holmes had shot 60 in the third round, and DA Points had carded a 61 where he’d threatened to hit the magic number. So Appleby, playing with Jimmy Walker, knew he had to go low to have a chance of winning.

And make no mistake, it was all about the win. Appleby had lost his playing rights at the end of 2009 for the first time in a career that began in the 1990s; only a one-off exemption for being high enough on the career money list had allowed him the right to starts on the American tour. A win would give him another two years in his job. It was that big for him.

Four consecutive birdies between the fourth and the seventh set the tone on the final day. Then at the par-four ninth, he wedged to kick-in distance, turning in 28, six-under par. After a brief lull, his pure mid-iron to the par-five 12th set up an eagle from three metres that took him into the lead, and at eight-under, the 59 discussion was emerging.

But after mere pars at 13, 14 and 15, he needed three consecutive birdies for a 59 and he’d fallen out of the lead. The man from Cohuna on the Murray River duly delivered. Mostly stony-faced throughout a day when the tournament win meant more to him than the score, he fist-pumped after his three-metre birdie putt fell at the 16th. Driving into a fairway trap at the par-five 17th, he laid up short, wedged to 2.5 metres, and rolled in another.

That meant he would approach the par-three 18th at 154 metres needing birdie for a career-first sub-60 round. Appleby was impervious to the outside noise; in the zone, as they so often say. His eight iron went straight at the flag, pitching and stopping three metres short of the cup. By the time his left-to-right slider was within a few centimetres of the hole, he was already raising the putter in his left hand and walking it in.

His was the second sub-60 score in just a month on the US tour, after American Paul Goydos shot 59 at the John Deere Classic. Goydos had the benefit of lift-clean-place rules at the John Deere, as did the original Mr 59, Al Geiberger, at Memphis in 1959. Appleby’s was the first sub-60 score on a par 70 course, and journalists asked afterward whether this diminished his achievement by comparison with the others?

Appleby was 39 at the time. He won the Australian Masters later the same year, but has never again won on the US Tour. His back troubled him, and his star fell in his late 40s. But he will always have that day in West Virginia. 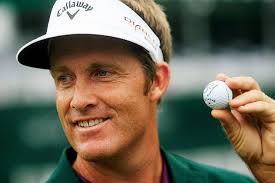