On the first playoff hole of the Ford Championship at Doral, Craig Parry holed his approach shot from 176 yards at the par-4 18th hole to collect his second career PGA TOUR victory, on March 7, 2004.  He has been one of Australia’s premier golfers since turning professional in 1985, and has 23 career victories, but is perhaps most fondly remembered for this shot on the big stage.

You’ve heard of walk-off home runs, and buzzer beaters in basketball. We’ve seen goals after the siren to win matches, and long puts to take home golf tournaments, but few times do we see golfers actually take a full swing and end of a golf tournament right then and there.

That’s what happened in 2004 at the then Ford Championship at Doral. Craig Parry was in a playoff with Scott Verplank and the two were playing the 18th hole when Parry sent his second shot from 176 yards directly at the pin.

The ball never left the pin, landed just short and trickled in for the eagle and the win. That moment at Doral would be the last time Parry stood in the winner’s circle at a PGA Tour event but that sure is a nice way to go out.

A report on the final round is below.

Craig Parry holed out a 6-iron on the first playoff hole Sunday to defeat Scott Verplank and win the Ford Championship at Doral.

Parry found the fairway off the tee at the 18th, the first hole of the playoff. In regulation, Parry hammered a drive over 300 yards at the lengthened ‘Blue Monster’ but in the playoff he did not go as far off the tee.

Verplank was in trouble at 18 as his drive landed in the right rough. He had a shot at the green and aimed right, getting a good bounce that ran his ball 30 feet from the hole.

Parry had 176 yards to the flag and with a 6-iron, landed the ball 15 feet short and right of the hole. Then the Australian watched as the ball rolled in for an eagle, giving him his second win on the PGA Tour.

‘It was amazing,’ said Parry, whose other victory came at the 2002 WGC-NEC Invitational. ‘I wasn’t aiming at the flag, I can assure you. I was aiming a couple yards right.’

‘I guess he was supposed to win,’ said Verplank. ‘Obviously it was a great shot. To go in the hole, there’s always a bit of luck. I was pretty proud of my shot until his ball got up there.’

Parry dropped a shot at the 13th and Verplank, playing in the group ahead of Parry, was now only one shot behind. Parry seemed to play tentatively after his margin fell to one, especially on the putting surfaces. He missed birdie tries at 15 and 16 but the swing hole in regulation came at No. 17.

Verplank drove into bunkers on the right side but hit an amazing 9-iron to two feet. He kicked in the birdie try to tie for first place. Parry drove into the thick rough near a tree and played his approach 40 feet right of the hole. He was able to two-putt for the par save but both players had to deal with the ‘Blue Monster.’

Verplank found the fairway at 18 and hit his approach to 35 feet. He ran his birdie try six feet past the hole but calmly sank the par putt to remain tied with Parry.

Parry nailed his drive down the fairway and had only 155 yards to the hole. He hit his second to 20 feet but missed the birdie try that would have won in regulation.

For Verplank, the loss ran his playoff record to 2-3. He hasn’t visited the winner’s circle since the 2001 Canadian Open, a few weeks after being named to his first Ryder Cup team.

‘I was a little bit behind all day long,’ said Verplank. ‘Fortunately I somehow made a birdie on 17. At least I still had a chance. It was an all or nothing deal.’ 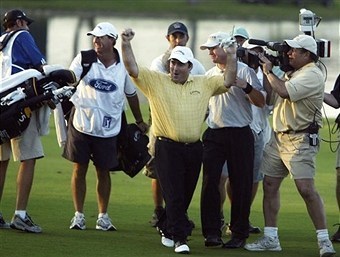