A beautiful day – we travelled to Rye and had a very exciting close game.  Finally, we held a narrow lead and the result came down to the very last end on the last rink to finish, with Hillis Houston as skip.  Loss of the end by four points or more would have seen us lose the day.   Happily and to the relief of all of us, they prevailed.   A win on the day with final total score of 61 to 59.  We retain second place.

Last round next Saturday against top placed Rosebud Country Club.  We’d love to finish the season on top of the ladder, as we did last year.  Good luck!

Flinders was comfortably ahead of Somerville at home last Tuesday when the heavens opened. Torrential rain for a good ten minutes flooded the green completely.  Not only that, but a blocked stormwater drain at the front of the clubhouse backed up. Only through judicious use of a straw broom wielded by one of our opponents were we able to avert serious inundation of the clubhouse. Repairs to the drain are now under way. 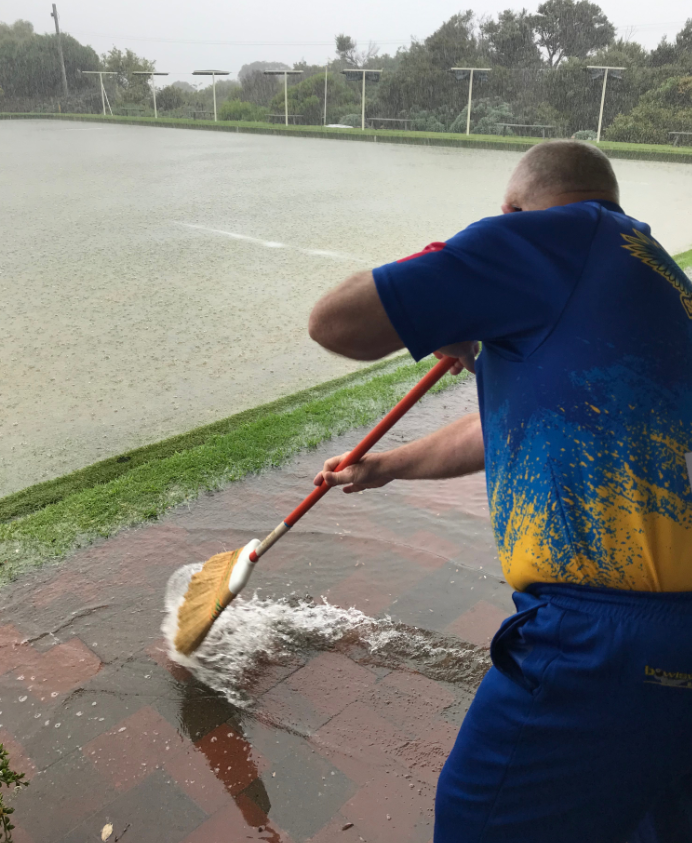 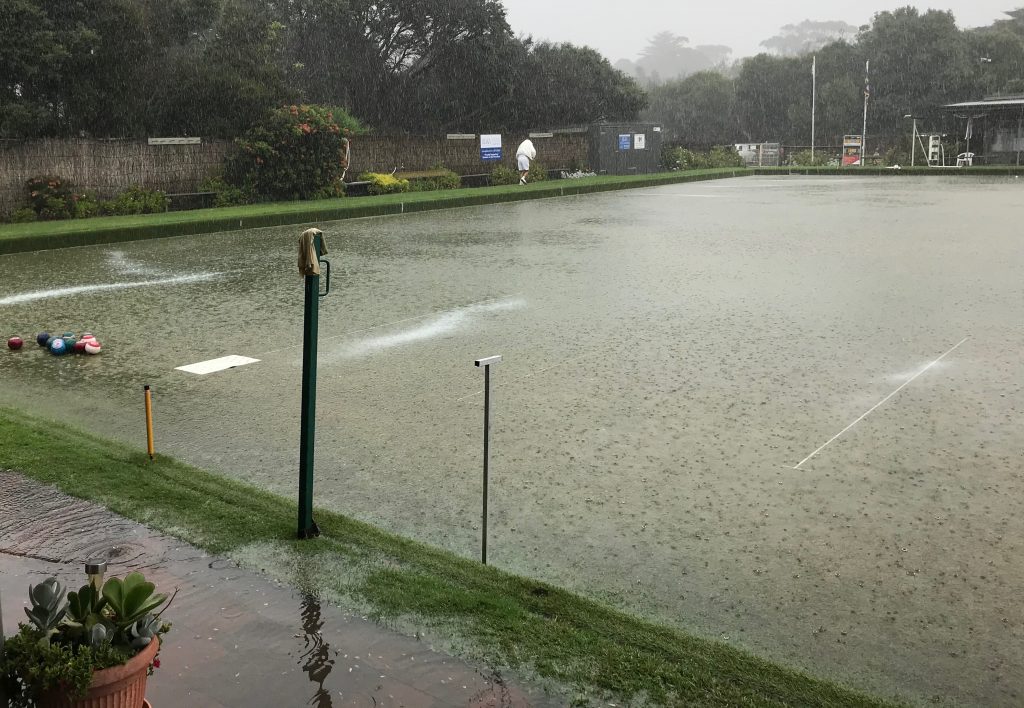 The game was abandoned, as were many others across the peninsula. As we had not completed the required 30 ends prior to play ending, no points were allocated.  Ladder positions unchanged.

Last round next Tuesday at home against Mt Martha.  A win would see us take first place. 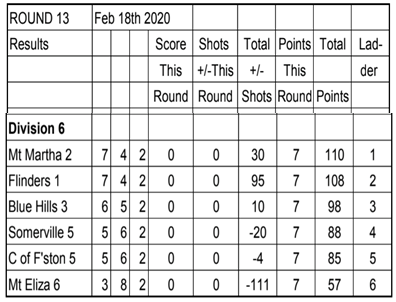 A home game against Village Glen this week on a damp green.  We needed a win against the team directly above us on the ladder, and we succeeded.  Thanks to this as results from other greens, we have moved up to second place.  Well done all.

Next week we play away at Rye.

We played away this week at City of Frankston.  Despite some good bowling from some members of the team we were unable to adapt to the green and were beaten 48-30.

Despite this, we retain our second position on the ladder.

Next week we play Somerville at home. 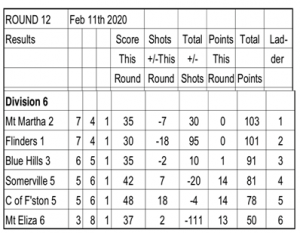 A home game against Balnarring this week.  We were well beaten by a team with some very strong players.  Final score was 75 to 46.

The ladder remains very tight from second place down.

Next Saturday is at home against Village Glen.

A pleasing win against Blue Hills, who travelled down from Cranbourne West to play us at our home ground.  Score was 44 to 31.

This has put us up into second place, only two points behind ladder leaders Mt Martha.

Next game is away against City of Frankston. 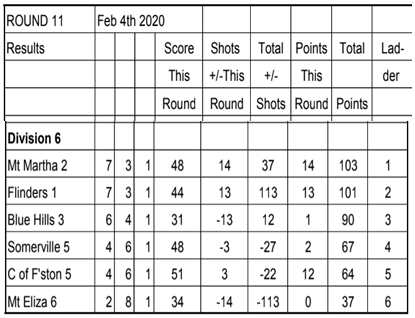 An excellent home win against Dromana, which is a very strong team.  Final score 78 to 46, with two rinks won and one halved. We remain in fourth place with second, third and fourth all very close.  Only four rounds to go, with three of these  to be played at home.  Our beautiful new green is suiting us well.

Again, our season started slowly in the midweek (Tuesday) competition due to a run of away games.   We have had some big wins recently and are delighted to have risen to third.

Next Tuesday 4th February we play Blue Hills at home. 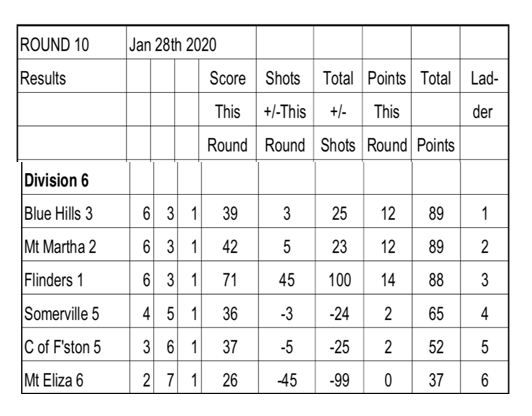 As our new green was not ready at the start of the season we not only lacked practice, but were forced to play a large number of early scheduled home games away.  These swaps now mean we have a run of home games, which is to our advantage.  After a slow start we are currently sitting in a very creditable fourth place on the ladder, with some good recent wins.  This Saturday 1st February we play Dromana at home. 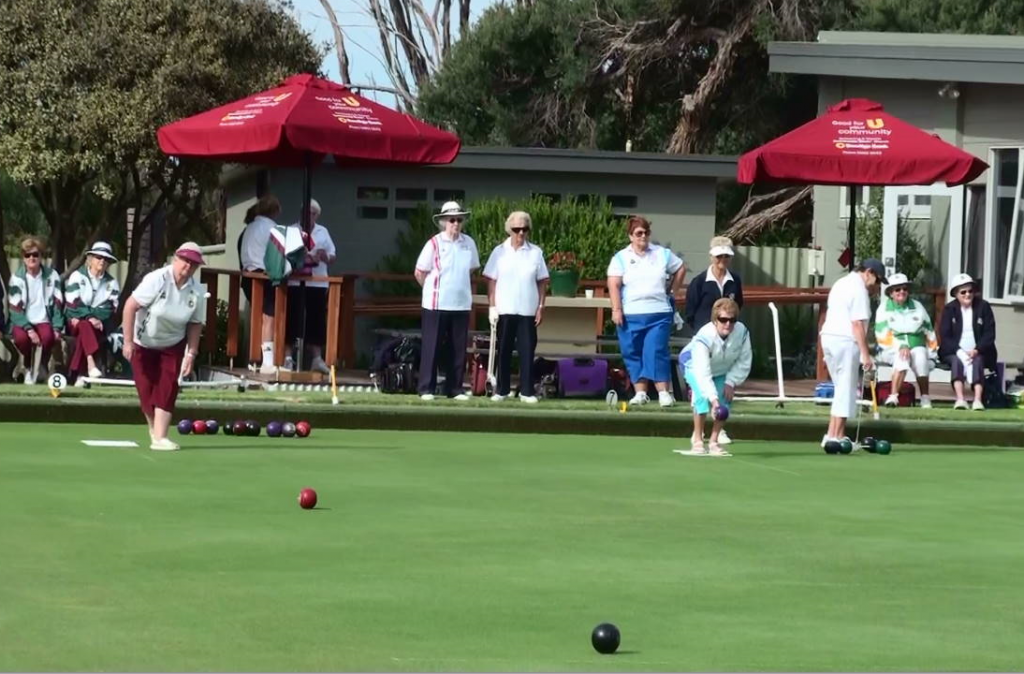